Here at Healthygums, you can be sure that we know our toothbrushes! In fact, we know them so well that we bring you only the best. It was love at first brush with its 0.02mm bristles that got right into the periodontal pockets, leaving our teeth clean and fresh. We want you to feel the same!
Boy, are we excited about this! We have been working relentlessly over the last 7 years to get you the best toothbrush on your favourite local supermarket. Systema is different because of its patented super tapered 0.02 mm bristle tip that is effective yet gentle on the gums.
Healthygums Pty Limited is a family business based in Newcastle. Our story began in 2013 when founders Peter Beard and Lai Lai Wong noticed the absence of soft bristle toothbrushes in the market.
We know that a toothbrush is a very personal thing and picking the right one can be quite confusing with the array of sizes and bristle types. So, we want to help you and your pearly whites with this. Soft bristles are recommended by dentists because it protects oral tissue while effectively cleaning your teeth.
Dental surgeries have been one of our main distribution channels since we began this journey. Since introducing the SYSTEMA brand to them, they have become converts and would highly recommend that you get one for your oral hygiene routine too.
SYSTEMA is the number one oral hygiene brand in Japan under Lion Corporation – a popular household product name among Japanese households. Lion Corporation is a public listed company in Japan and one of the top manufacturers of personal care products in Japan. They are constantly innovating, making sure that their customers gets the best care for their gums!

No. 1 oral care brand in Japan*

Released to the market in 1993 in Japan, with Lion’s proprietary super-tapered bristles, they have been the No. 1 * selling brand in the toothbrush market in Japan for 11 years due to their high level of customer popularity.

The bristles are made from high-grade PBT (polybutylene terephthalate), more durable than ordinary nylon bristles. In addition to its unique 0.02mm patented super-tapered tips of the bristles that are soft and gentle for gum care, Systema’s range of toothbrushes also feature a smaller compact brush head size.

Released to the market in 1993, Dentor Systema toothbrushes feature Lion’s proprietary super-tapered bristles, which are 0.02mm in diameter at the tip.

This feature makes it possible to penetrate deep within the narrow crevices of the periodontal pocket, between the teeth and gums, to effectively remove the grime that causes periodontal disease, delivering a high level of oral cleanliness.

It's all in the bristles


View our entire range now to find the perfect brush.

We were featured in Bite Magazine’s July edition 2015 on page 12. 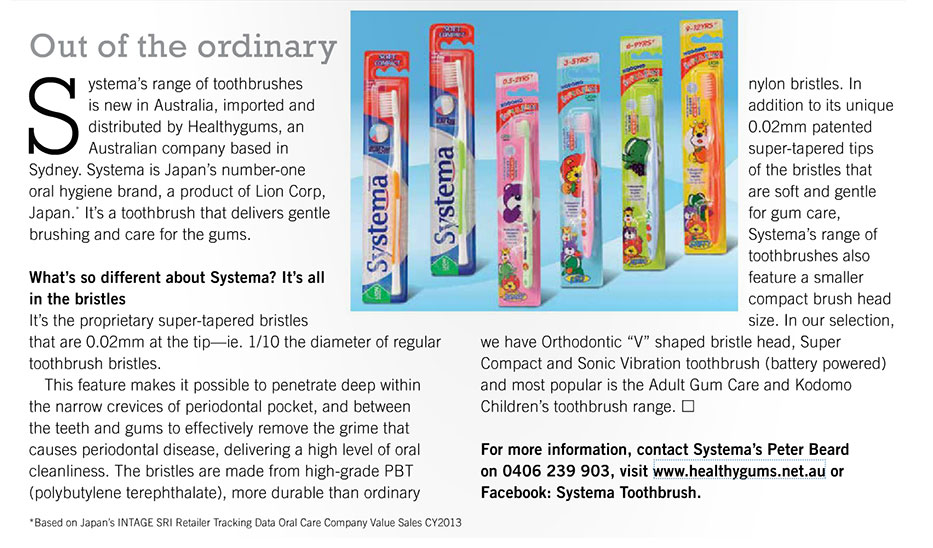